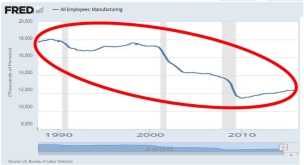 According to the Bureau of Labor Statistics, United States manufacturing employment rose from 1945 to a peak of about 20 million jobs in 1980. It then dropped by about 8 million, or 40%, from 1980 to 2015 while manufacturing output almost doubled. Doubling output while reducing labor by almost half was the result of automation and robotics. Technology increased human productivity in many jobs and eliminated humans in others.

The lost manufacturing jobs were the backbone of the economic success enjoyed by the Middle and Working classes from the end of WWII to 1980. They only required moderate skills and reliable attendance to produce very high value and they built much of our economy. Their loss has been devastating to the Middle and Working Class people who depended on them.

One thought on “Disruption in Manufacturing”